Hamlet at the Harold Pinter

Hamlet at the Harold Pinter

This is a scene by scene review/commentary.

In case you plan to see the play, or have a chance of doing so, please skip the review and head to West End. It is not to be missed. Get thee to the play. Seriously! In case you just cannot catch it, then make do with this. I have tried to capture my experience of the play, it is hardly comparable to being there, but I had to write this long commentary so that I don’t forget what it felt like to watch this amazing performance, and so that I preserve for myself the thoughts and feelings that were evoked through it.

A spartan set greets the audience, which in addition to the lack of anything royal about it, also has a few unexpected elements. A large sofa to one corner, two-three steel chairs to either side, and what looks like a steam-punk console of some sorts to one corner. 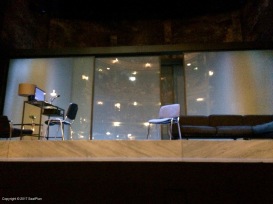 To the immediate surprise of the spectators, the play opens with large flat TV screens switching on all around them with weird footages playing in them.

Instead of a guard platform we get a CCTV observation room. The guards look flustered and soon, of course, Horatio enters (in some style I must say, much more casual in attire compared to the stiff suited guards). 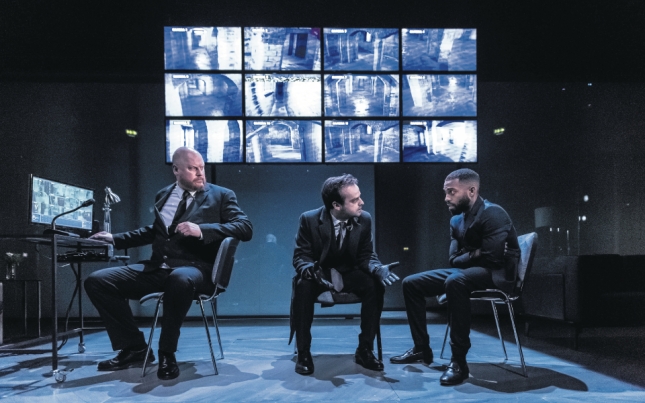 Marcellus and Barnardo resume their attempts to convince Horatio (one is to assume somehow the CCTVs could not record the supernatural stuff, I guess) of what they have seen when all of a sudden horrific static erupts in the theater and the dead King appears on-screen, ominous and really really spooky. A collective gasp from the audience at this. It was pretty effective – considering the Dane had only come on-screen yet – the audience has not been introduced to the real ghost yet. I wondered if all ghost scenes would be thorough CCTVs… that would be a pity even if it went pretty splendidly this time. After all how would the father-son equation, which is the core of the play, play out through CCTVs? In any case, even as Scholar Horatio tries to hail the Ghost (who is in military attire, as a modern parallel to the armor worn by the original), there is a minor explosion at the console and the Ghost had disappeared from the screens as abruptly as it had appeared.

Before the scene concludes Horatio quickly updates the soldiers about what is happening in the kingdom and why security is so tight these days: The old King killed his rival King of Norway, Fortinbras, and conquered his territories. Now his (Norway’s) son, in revenge, is attempting to take back his territories with a small band of rag-tag outlaws he had gathered. Mark that from this it doesn’t feel like Fortinbras had any chance of defeating Denmark, but then an internal revenge drama will facilitate the external revenge drama. Pretty sweet, right? This is something that is often overlooked I guess, but maybe there was a poetic symmetry to this as well.

The Ghost makes another abrupt appearance, throwing the guards and Horatio into another frenzy. More frantic fiddling of the dials, etc. ensue (to be honesty this time it felt a bit comic, the reactions).

Ghost exits. It faded on the crowing of the cock – the guards quickly trying to explain away the unknown with the presumed known, finding some comfort in their astute understanding of how the supernatural world is supposed to function. We have to make everything conform to rules, absurd though they may be.

They decide that they have to inform Hamlet of what has been happening here.

Scene closes to some stunning music and the stage goes pitch black. Obviously some stage rearrangement was underway in the darkness, though I am unsure how they manage to do so in that darkness. Must take some deft hands. END_OF_DOCUMENT_TOKEN_TO_BE_REPLACED